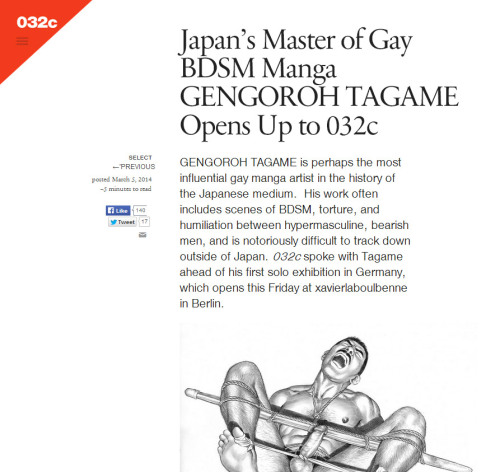 Actually, I’m one of the originators of Japanese bear culture. When I started my career, a man with a beard was very rare, even in the gay community. I believe that I’m the first one who used the word ‘熊系 Kuma-kei‘ (bear type) in the context of Japanese gay culture.  When I started to use the word, I didn’t know much about the bear culture in Western world. So my ‘bear type’ was masculine, bearded and hairy, but not necessarily ‘chubby’.

Before me, there weren’t any Japanese artists drawing bearded and hairy masculine guys as an idea of a sexual fantasy. After the word Kuma-kei became popular in Japan, some began drawing bigger guys than mine, and their drawings were closer to Western bear culture than my works.

But the situation changed a little by little. Now it’s much more common in the Japanese gay community. Some people say it is the influence of my works, but I don’t know.