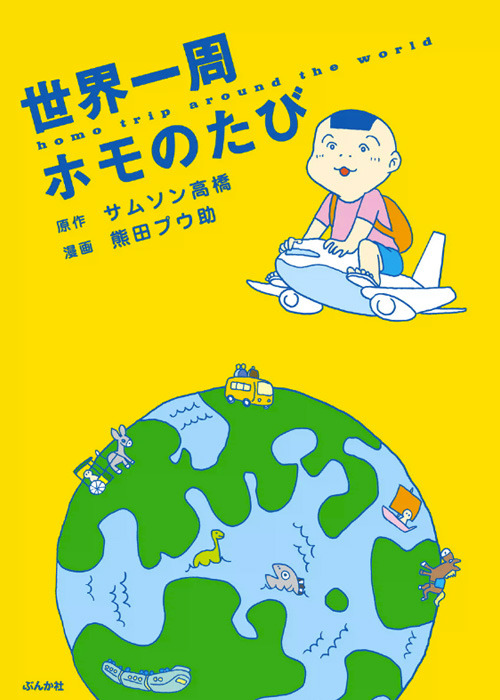 This is possibly the funniest and cutest manga I read in 2013. It’s an essay comic about a Japanese gay guy traveling around the world visiting famous spots to have gay sex. And having lots and lots of gay sex. Samson Takahashi is a top who loves chubs and bears, so all the places he visits specializes in chubs and bears, meaning this manga is pretty useless as a travel guide even to the majority of gay men. And I’m not a gay man. But it’s just hilarious.

Takahashi goes to gay sauna in ever city he visits, but more often than not, gets ignored by all the chubs and bears he fancies. He goes to the riverside to get laid and sees an old guy with a green penis tattood like a turtle. He hooks up with a hot chubby Italian in Turkey, but when he travels all the way to Italy to see him again, he gets dumped when he grudgingly admits he’s not working. I… don’t even know if that sounds funny in text, but it’s all told with incredibly self-deprecating humour and the absolutely adorable art by Kumada Poohsuke:

No one can draw chubby bears with their dicks hanging out as adorably as he can! I don’t think any other manga made me laugh more in 2013. It’s a gem. And if you are the sort to be interested in useful information for backpackers, there are actually pages with recommended restaurants and such, too! It’s not just about gay saunas. Just mostly.

Review of Kumada Poohsuke (熊田プウ助) and Samason Takahashi (サムソン高橋氏)‘s Homo Trip Around the World (世界一周ホモのたび)
by Alicia of the excellent shojo manga Tumblr Brick Me With a Brick!