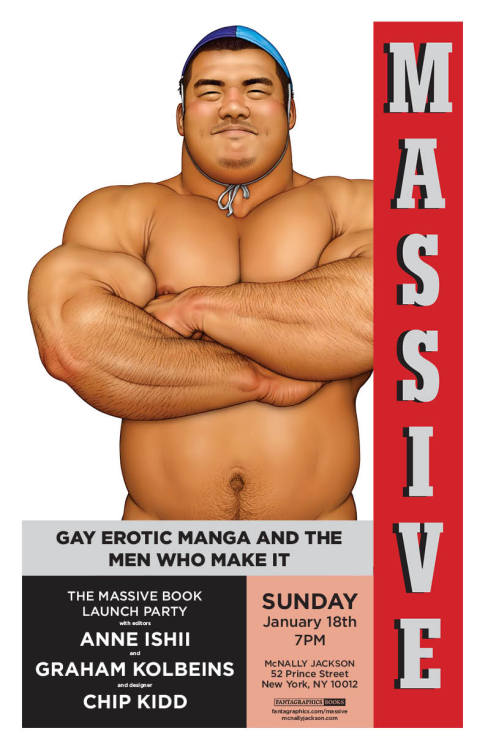 Big, burly, lascivious, and soft around the edges: welcome to the hyper-masculine world of Japanese gay manga. Massive: Gay Erotic Manga and the Men Who Make It is a survey introduction to a diverse and important group of men responsible for some of the most emblematic gay manga drawn for fellow gay readers. McNally Jackson Books of New York invites you to visit this world for a night on Sunday, January 18th when the editors and designers behind the anthology gather for release party. Join Anne Ishii, Graham Kolbeins and Chip Kidd when the fun and book signing starts at 7pm. Whether you are previously a baru fan or just looking to dip your toe into the pool, Massive has something for everyone as the book also provides a rich background to each of the artists and a brief history of gay erotic arts and illustration.
-
Massive editor (and former Director of Marketing & Publicity for Vertical, Inc.), Anne Ishii lists her career highlights as publishing The Passion of Gengoroh Tagame (Picturebox), translation of the 10-volume series Detroit Metal City (Viz), and board member of the Asian American Writers Workshop. She also co-created and curates Massive Merch: Gay Paraphernalia with Graham Kolbeins.
-
Meanwhile, editor and designer Graham Kolbeins’ dark past includes directing the documentary web series Rad Queers which screened at Outfest; co-editing of The Passion of Gengoroh Tagame; designing clothes at MASSIVE; editing the blog Gay Manga! and contemporary art blog Future Shipwreck; and blogging for Spike Jonze’s last two films (Her, Where the Wild Things Are).
-
Chip’s career speaks for itself but an exhaustive history is here.

I can’t wait for the Massive launch party at McNally Jackson Books!! Come join in the fun with me, Chip and Anne on Sunday, January 18th!