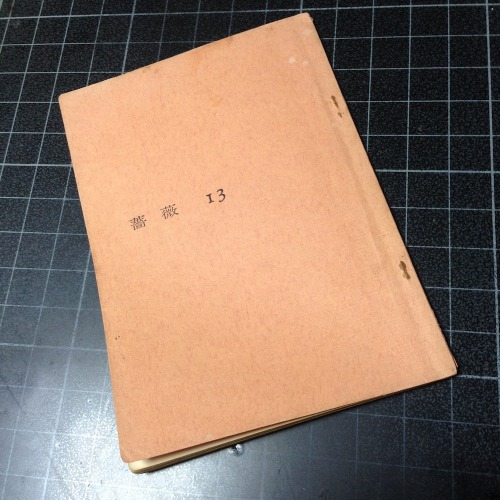 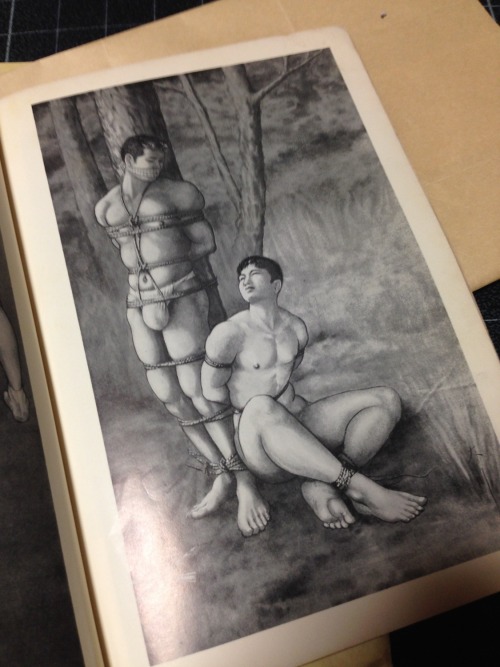 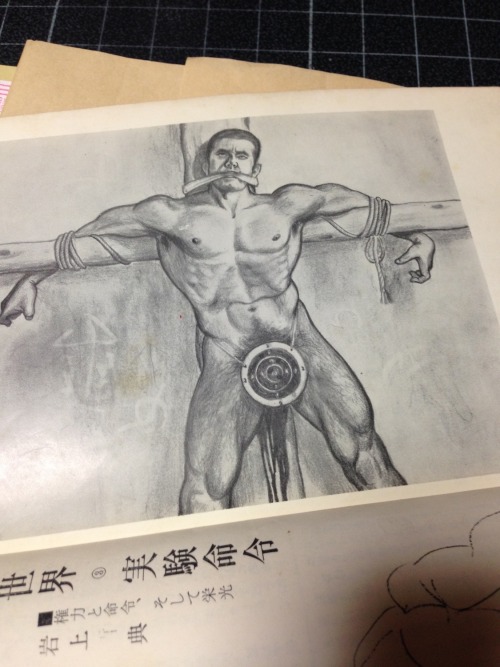 My old friend sent me a vintage Japanese members-only homosexual magazine 薔薇 Bara (rose), issue 13 (July 1965). I could find some marvelous drawings of 大川辰次 Tatsuji Ôkawa and 船山三四 Sanshi Funayama on it.

An aside about the history of the term "bara”: Literally meaning “rose,” bara once held power as a pejorative term used primarily by heterosexuals to slander homosexuals. These magazines of the ‘60s and '70s radically co-opted the term in their titles. “It was very shocking and sensational to publish something in the jargon of the hetero sort of nomenclature for gays, exactly like the word 'pansy’ in English,” Gengoroh Tagame told us when Anne and I interviewed him in Tokyo.

“Whereas gays probably don’t call each other 'pansies’– it’s not a good thing– but to re-appropriate 'bara’ was a big deal. But by the time I was getting bigger as an artist, that word was almost obsolete and we don’t use that word anymore. It was important for us to call ourselves 'gays' and 'homosexual’ rather than 'bara,’ which is just for hetero people to call us. Amongst ourselves, we don’t use that word, but people from outside will still use that word to call out gay people.”

The Internet, as it tends to do, complicated matters. Just as the word was becoming obsolete in Japanese parlance in the early '90s, “bara” found new life internationally through online message boards. “The organizers and the service providers and the people running these forums were straight, so they called the gay board the 'bara’ board,” recalls Tagame. “A 'bara’ chat room or a 'bara’ board. The Internet conversations that were taking place about gay content were shaped by straight people, and then of course the Internet is how foreigners discovered our work. They saw that this whole section was called 'bara,’ so that’s how I believe foreigners started to use and appropriate that word. And the word has come back to life, unfortunately, and I have to say personally, I’m sort of against it. I don’t call my own work 'bara’ and I don’t like it being called 'bara’ because it’s a very negative word that comes with bad connotations.”

The ever-shifting term means a variety of things to a variety of people these days, so I would say there’s no one right way to feel about “bara.” When we inquired with with the mangaka Kumada Poohsuke on the subject, he says he almost never hears the term used in Japan, but it doesn’t bother him if Americans use it. “Frankly, for Japanese people, if anything, you talk about 'beefy’ manga or 'big guys’ or 'fat guy’ manga, or gay manga or homo manga—but not really 'bara’ manga. On top of which: obviously my content is gay, but I don’t like to fix myself into [sexual] categories. You know, it’s not problematic really, it’s just that we don’t use the word. Americans can use it, and if it means something and immediately signifies something, that’s great. Keep using that word."

Over the past two decades, a plethora of new meanings have been ascribed to "bara” online, as it’s come to describe the masculine aesthetic styles and bigger body types frequently found in gay manga. It has been used in various places by various people to refer not only to gay manga, but all kinds of “2D” erotica, sometimes including BL, furry art, Western gay cartoons, video game fan art, and even occasionally photographic gay erotica.

In today’s “bara” communities, images of gay manga circulate alongside artwork from populist online communities like Pixiv, DeviantArt, and FurAffinity. Wikipedia has a page for “bara” with a definition pieced together from various concepts mostly relating to the term’s Western useage as a synonym for gay manga. I’d like to improve that Wikipedia page some day, but I don’t even know where to start. The point is, “bara” is a charged, complex term that eludes simple definition. While I appreciate the way “bara” has unified Western fans of Japanese gay art in recent years, after speaking to a number of the artists on this subject, I personally avoid it out of respect for the artists’ agency and freedom to self-identify.