This is a never-before attempted collection that includes over 140 quality color reprints of artwork by Go Mishima, Tatsuji Okawa, Sanshi Funayama, Hirano Go and artists from the influential “perverse magazine” Fuzokukitan like Toshimi Oda.

Each artist as well as their historic legacy of gay erotica is introduced by compilation editor and gay manga pioneer Gengoroh Tagame. These English-Japanese bilingual editions are each signed by the master, Tagame, and come in die-cut slipcases, packaged by the folks at Pot Publishing (also responsible for Tagame’s several re-issues, including Shirogane no Hana). 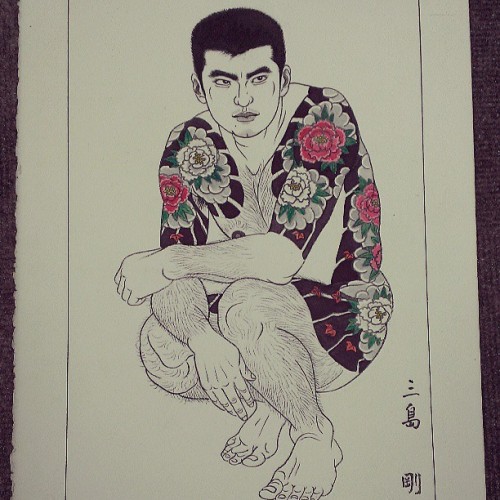 Even in the issues with images of women on the cover, the catch copy featured gay related articles such as “Sexual Desire: Pictures of Sodomy and Lesbos” (October 1961), “The Country of Sodom,” and “Graphic: The World of Sadism, Masochism and Homosexuals” (special extended issue, August 1963).

Tagame goes on to detail the contents of Fuzokukitan’s August 1962 issue (top left in the above gallery):

The frontispiece is four male nude pieces by Tom of Finland, who was also a “physique” magazine artist. The illustrations on the index page are similar. Then, there are sixteen gravure pages, and five out of the sixteen are of male nudes. Eleven pages of heterosexual frontispieces follow, then five pages of transvestites, and after the body in the middle section of the magazine, are eight pages of gay frontispieces. There are two gay articles out of six featured articles on “Cruel Stories of The War Front.” Of those seven essays and memorandums, three are gay and one is transvestite themed. One of the two serial novels has a gay theme, and there is a gay column and a transvestite column. What’s more, thirty seven out of fifty people with ads in the personal section are gay, more than half. As shown above, at least in this issue, over half of the contents are related to gay issues.