mocatv: MOCA and the Tom of Finland Foundation wish you a Merry... 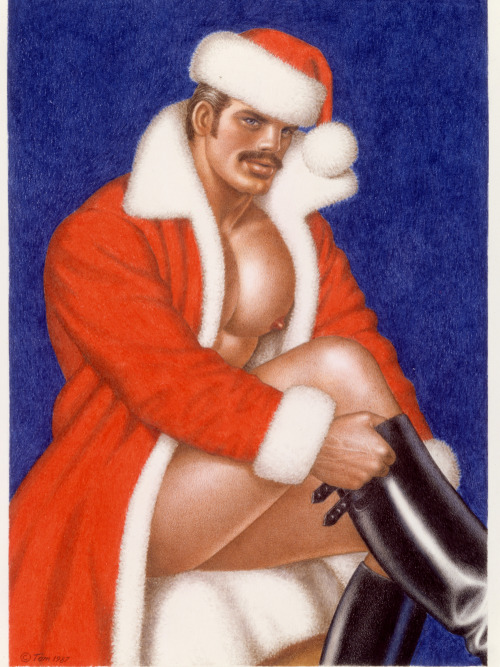 MOCA and the Tom of Finland Foundation wish you a Merry Christmas. The Bob Mizer & Tom of Finland show at MOCA PDC in West Hollywood is closed today but open on Christmas Eve.

mocatv: MOCA and the Tom of Finland Foundation wish you a Merry... MOCA and the Tom of Finland Foundation wish you a Merry Christmas. The Bob Mizer & Tom of Finland show at MOCA PDC in West Hollywood is closed today but open on Christmas Eve.

I’m so stoked for the Bob Mizer and Tom of Finland show opening... I’m so stoked for the Bob Mizer and Tom of Finland show opening on November 2nd at MOCA!

MOCA presents Bob Mizer & Tom of Finland, the first American museum exhibition devoted to the art of Bob Mizer (1922–1992) and Touko Laaksonen, aka “Tom of Finland” (1920–1991), two of the most significant figures of twentieth century erotic art and forefathers of an emergent post-war gay culture. The exhibition features a selection of Tom of Finland’s masterful drawings and collages, alongside Mizer’s rarely seen photo-collage “catalogue boards” and films, as well as a comprehensive collection of his groundbreaking magazine Physique Pictorial, where drawings by Tom were first published in 1957. Organized by MOCA Curator Bennett Simpson and guest co-curator Richard Hawkins, the exhibition is presented with the full collaboration of the Bob Mizer Foundation, El Cerrito, and the Tom of Finland Foundation, Los Angeles.

Tom of Finland is the creator of some of the most iconic and readily recognizable imagery of post-war gay culture. He produced thousands of images beginning in the 1940s, robbing straight homophobic culture of its most virile and masculine archetypes (bikers, hoodlums, lumberjacks, cops, cowboys, and sailors) and recasting them—through deft skill and fantastic imagination—as unapologetic, self-aware, and boastfully proud enthusiasts of gay sex. His most innovative achievement though, worked out in fastidious renderings of gear, props, settings, and power relations inherent therein, was to create the depictions that would eventually become the foundation of an emerging gay leather culture. Tom imagined the leather scene by drawing it; real men were inspired by it… and suited themselves up.

Bob Mizer began photographing as early as 1942, but unlike many of his contemporaries in the subculture of illicit physique nudes, Mizer took the Hollywood star-system approach and founded the Athletic Model Guild in 1945, a film and photo studio specializing in handsome natural-bodied (as opposed to exclusively muscle-bound, the norm of the day) boy-next-door talent. In his myriad satirical prison dramas, sci-fi flix, domesticated bachelor scenarios, and elegantly captivating studio sessions, Mizer photographed and filmed over 10,000 models at a rough estimate of 60 photos a day, seven days a week for almost 50 years. Mizer always presented a fresh-faced and free, unashamed and gregarious, totally natural and light-hearted approach to male nudity and intimate physical contact between men. For these groundbreaking perspectives in eroticized representation alone, Mizer ranks with Alfred Kinsey at the forefront of the sexual revolution.

Though Laaksonen did not move to Los Angeles until the 1970s, he had long known of Mizer and the photographer’s work through Physique Pictorial, the house publication and sales tool for Athletic Model Guild. It was to this magazine that the artist first sent his drawings and it was Mizer, finding the artworks remarkable and seeking to promote them on the magazine’s cover, but finding the artist’s Finnish name too difficult for his clientele, who is responsible for the now famous “Tom of Finland” pseudonym.

By the time the gay liberation movement swept through the United States in the late 1960s, both Tom of Finland and Bob Mizer were already well-known and widely celebrated as veritable pioneers of gay art. Decades before Stonewall Inn and the raid on the Black Cat Tavern these evocative and lusty representations of masculine desire and joyful, eager sex between men proliferated and were disseminated worldwide at a time when the closet was still very much the norm—there was no such thing as a gay community. If these artists were not ahead of their time, they might just have foreseen and even invented a time.

Spanning five decades, the exhibition seeks a wider appreciation for Tom of Finland and Bob Mizer’s work, considering their aesthetic influence on generations of artists, both gay and straight, among them, Kenneth Anger, Rainer Werner Fassbinder, David Hockney, G.B. Jones, Mike Kelley, Robert Mapplethorpe, Henrik Olesen, Jack Pierson, John Waters, and Andy Warhol. The exhibition also acknowledges the profound cultural and social impact both artists have made, especially in providing open, powerful imagery for a community of desires at a time when it was still very much criminal. Presenting the broader historical context and key aspects of their shared interests and working relationship, as well as more in-depth solo rooms dedicated to each artist, the exhibition establishes the art historical importance of the staggering work of these legendary figures.

In addition to approximately 75 finished and preparatory drawings by Tom of Finland spanning 1947–1991, the exhibition includes a selection of Tom’s never before exhibited scrapbook collages, and examples of his serialized graphic novels, including the legendary leatherman Kake, as well as a selection of Mizer’s “catalogue boards,” AMG films, and a complete set of Physique Pictorial magazine. An accompanying publication includes texts by the exhibition co-curators and a selection of images.

Two fantastic-sounding panels are also coming up in conjunction with the exhibit, featuring some of my favorite artists, experts and human beings:

PANEL DISCUSSION: “THE SHAPING OF DESIRES”